A downloadable capsule rpg for Windows, macOS, and Linux

FUSSY PRISSY DREAMING WANDER
COUNTRY SOLD TO YOU FOR ONLY €5
€5 €5 WITH MUSIC BY NEW VADERS
AND COLOURS AND THINGS.

Categorically, it is a narrative JRPG. You walk around, there are doors and trees. You go here and you go there. There are fragments of plot relayed out of sequence but you do not care because the music and the colours. When the narrative peaks, you say "Good!" and then forget it. The years neglect this fertile country but the trees and doors still standing somewhere form a silent windless day.

The game is available for Mac Linux and PC.
It is best played with a mouse and not trackpad, think of it like a twin-stick game.
Good luck and get the magic wand.

In order to download this capsule rpg you must purchase it at or above the minimum price of $4 USD. Your purchase comes with a Steam key. You will get access to the following files:

There are very few things in life that inspire me so completely and thoroughly to make video games more than playing a game by thecatamites. Thank you man.

Wonderful RPG. Fulfilled my ambition to be a knight errant in an RPG. Thanks for being one of the greatest to ever play the game.

It looks wonderful, but is there a fullscreen mode? It's very tiny on my 4k monitor

Hey Iam trying to get in touch with the secret society of thecatamites. Anybody has a clue which magic tree i have to hug ?  xx A

that tree has been cut down a while ago, now you have to "message" them or something.

There’s something about Magic Wand that I love. At first glance it looks kind of messy but for some reason it looks appealing. The weirdness is appealing and I like weird but I guess I’m also a fan of the creators work.

The things that I liked

What I liked the most was the adventure. It really felt unique and fun to play. I didn’t know where to go and just explored the world hoping that something cool would happen.

I liked the art style of the game. It has that nice pixel look but the freshness of a 3d game. It’s quite wonderful.

The music was really good. That indie music touch is so great and it’s pleasing to the ears.

I also liked how easy the game was. HP didn’t matter for me and maybe that was on purpose.

Can’t die from falling off the edge.

I didn’t like how there wasn’t a good story. I would say that the story felt non existent.

I didn’t like most of the dialogue from NPC’s. They just said nonsense.

I didn’t like how there wasn’t a shop to buy cool new things like potions or weapons.

I didn’t like the blocks that you could break as they served no real purpose.

Windows version can’t fullscreen so it may be best to reduce screen resolution to play.

I really enjoyed the game even when I was playing on a trackpad. I guess I would also like to say that this game was very relaxing to play. It was a fun time indeed!

I love this...what did you make this in? This art style is so cute and unique.

First of all, great game! I just bought the bundle, and I'm loving magic wand and the notes so far. But I'm kind of confused as to where I would get the steam key.

Edit: Just found the key, had to log on to itch through browser and hit download there.

Also, this is kind of unrelated, but it says 50 short games isn't available for windows on the itch.io client, so I'm not sure how to access those.

Edit: Also just found out you have to download 50 short games through browser, the client doesn't work. I guess this comment is sort of useless now :\

Ah, thank you! I haven't tried out the client myself but I'll have a look at 50SG and see if there's a way to set it up there. It's kind of a weird case since it's a loader for 50 separate games so it could work best just playing from desktop anyway, hahah.

On a somewhat unrelated note, I just finished Magic Wand. Honestly - probably GOTY 2018 for me. I've always wanted to make my own game, and seeing 50sg, MW, and all your other offerings is hugely inspirational to me. So thanks for that :)

...Though, I was a little confused about the capsules - Is there only the one capsule machine in the game? And if so, how do you get more capsules after leaving the first world?

Ah, thank you! And IIRC there should be four capsule machines in the game - one in the hotel garden, one in Bigdug's office, one in the parade grounds area of Beachtown, and one in the Skuldug moon laboratory. But they're hidden, just like in life....

Do you get a Steam key as well?

Yes, there should be a Steam key with each copy - when you buy here and hit "Download" you'll have an option to claim it.

If for some reason there isn't just drop a comment and I'll check it out!

I think you should brush up on your style and join the ranks of the AAA game developers. You have the talent to join the hundreds of faceless clones that created such mind-numbingly boring games like Assassin's Crud or something.

I freaking love your games because they are fun, hilarious and immanently surprising. Magic Wand is a great example of the biting humor I love.

Get them pots, sir 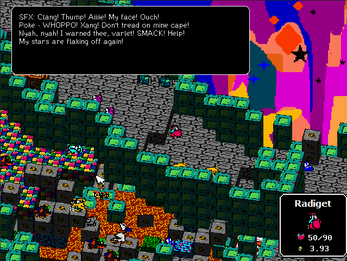 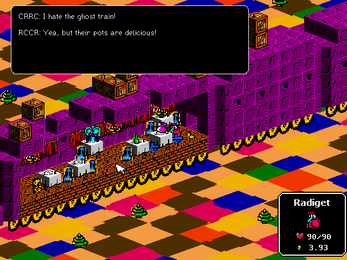 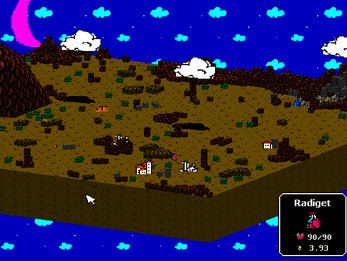 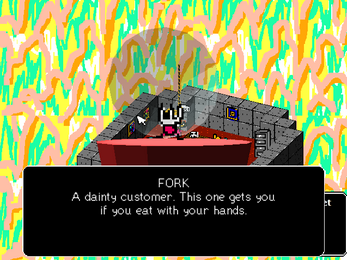